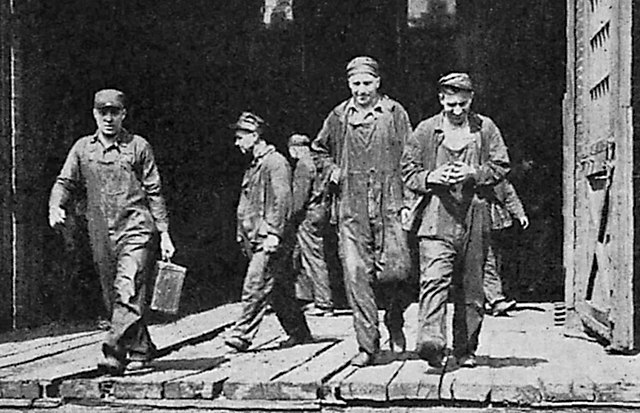 In a pique after being harassed by a group of populists on a sidewalk one Saturday in August 1896, a small-town newspaperman strode to his office and wrote a column thrashing his tormentors’ politics. With accessible prose, William Allen White argued against a proposal to use legislation to create prosperity for the working classes. The column launched him to national prominence.[i]

His support for the business classes over labor changed twenty-six years later, however, when a national strike of railroad workers afflicted Kansas and his hometown of Emporia, where White was the publisher of The Emporia Gazette, and when his right to speak his mind freely was contested under Kansas law.

“We Are for Striking Railroad Men”

It started when railroad shopmen struck after the Railroad Labor Board approved a wage reduction on July 1, 1922.[ii] On that day the first Kansas union shopmen walked off the job. The Atchison, Topeka and Santa Fe was the biggest railroad in the state, with a repair shop in Emporia that employed between 900 and 1,200 people at a time when Emporia’s entire population was about 12,000.[iii]

White felt that labor needed to be able to negotiate on level ground. He called the railroad workers genial neighbors: “The shopmen met merchants in the churches and lodges, and they all were on friendly terms.”[iv] White was on friendly terms with them, too, and the men asked him to put up a sign in support of the strike. He did and ended up arrested for it.

Another factor was in play. White’s support of labor was different from his friend Henry Allen’s, who had become governor in 1919 and believed that labor deserved a respectable standard of living but not equality. Governor Allen had proposed creating a special court to adjudicate disagreements between labor and capital, and before it became law in 1920, White testified in its support. Only two years later the governor had White arrested under its provisions.[vi]

That’s because the law also created protections against unpopular speech about agriculture, manufacturing, and transportation, industries essential to Kansas. Kansans were forbidden from encouraging someone else to strike a business in one of those industries.[vii]

When we look back at the anti-picketing portion of the law and White’s resistance to it, it’s easy to think that Governor Allen had obviously overreached. After all, most journalists today abhor the idea of restricting debate. The prevailing metaphor in newsrooms is that of the marketplace of ideas, a forum of unimpeded speech leading to the truth, or its best obtainable version.

In the marketplace metaphor, the government—those bodies and agencies that “shall make no law”—may not judge which ideas may be part of a debate. Instead, the public has that role. Because the government is forbidden to act, legal scholars consider it the “negative” interpretation of First Amendment theory: the government may not take part.[viii]

Along with the negative theory is an affirmative theory that the listener, not the speaker, is the one exercising First Amendment rights. To help the listener, the government has the “duty … to ensure that ‘everything worth saying shall be said.’”[ix] So if the First Amendment says that the public should hear the debate that lets them make informed decisions, then the government has an interest in elevating quieter voices onto the same stage as powerful speakers, which the Federal Communications Corporation does with broadcast airwaves.

Both approaches assume that the First Amendment is best used to promote effective self-government, but each has its weaknesses. The marketplace idea expects all listeners have the time to listen to all sides of a debate, have the will to do so, and are rational enough to make sense of the competing messages. Another weakness is that one voice may become dominant, crowding out competing voices. Looking at the affirmative theory, the essential weakness is exposed by one question: Who in the government would decide which small voices to elevate?

White hoped to be convicted so he could appeal to the U.S. Supreme Court, but a state court dismissed the case before it went to trial.[x] In the meantime, White answered a letter from a friend who had suggested he stop roiling the waters. White then turned his letter into an editorial that explained the reason he spoke up: “You say that freedom of utterance is not for time of stress, and I reply with the sad truth that only in time of stress is freedom of utterance in danger.”[xi]

The column, “To An Anxious Friend,” made White the first Kansan to win a Pulitzer Prize. So let’s consider how White’s speech, and the law under which he was prosecuted, would be viewed today. In the affirmative theory, the government could have helped elevate the strikers’ voices. Instead, Kansas statute did the opposite and forbade their speech.

Next, if free speech is the right of the listener, that right was removed by the statute. The government limited debate rather than enhance it. In the negative theory, it’s hard to imagine why the marketplace of ideas would outlaw debate over workers’ pay. It appears that any restrictions on the strikers’ speech would fail. There was no benefit to the public in limiting the debate, though Governor Allen would argue that the benefit was to keep coal and corn moving across the country.[xii]

There’s another way of interpreting the window placard case through the First Amendment. Like the marketplace theory, it depends on the speaker but puts the emphasis on the speaker’s decision to stand up and speak against the powerful. First Amendment scholar Vincent Blasi created the civic courage theory, in which an individual uses debate to protect the authority of the people over the government. Blasi suggests that when people see someone “standing up to authority or convention or corruption or evil or mediocrity,” others may be energized to do the same. The goal is to do what the First Amendment makes a citizen’s right: engage. According to Blasi, “A society that encourages questioning, auditing, experimenting, and revising is more likely to notice problems generated by changing conditions.”[xiii]

As Blasi points out, the First Amendment requires us to choose what we say and how we say it, which speakers we pay attention to, and what to believe. The speakers in 1922, including the governor and the railroads, the strikers and White, had their say in different ways. But the Legislature didn’t pay sufficient attention. The law prohibiting picketing railroads is still on the books.

About the author: Stephen Wolgast is professor of the practice of journalism at the A. Q. Miller School of Journalism and Mass Communications at Kansas State University and the adviser to the Kansas State Collegian. Before teaching, he worked at newspapers for 19 years, including at The Baltic Independent in Tallinn, Estonia; The Times-Picayune in New Orleans; and The New York Times.

[vii] It was illegal for anyone “to induce or intimidate any person” in one of the protected industries “with the intent to hinder, delay, limit or suspend the production or transportation” of those industries. In other words, encouraging someone to keep the trains from running on time could put a Kansan in jail. Kansas Statutes Annotated, 44–617.