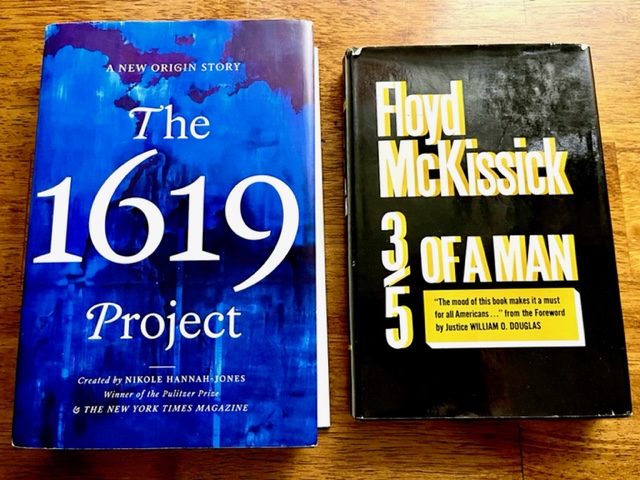 In two books published 50 years apart, journalist Nikole Hannah-Jones and civil rights attorney Floyd McKissick touched on many of the same themes concerning the national legacy of slavery, including ongoing economic injustice and systemic discrimination against Black Americans. The 1619 Project: A New Origin Story – journalist Nikole Hannah-Jones’ 2019 New York Times Magazine package that reframes 400 years of contributions by African Americans – garnered praise, pushback, and a Pulitzer. In 1969, attorney and activist Floyd McKissick (1922-1991) wrote 3/5 of a Man, a book that also cites 1619 as the year when the first ship with enslaved people from Africa arrived in the British colony of Virginia.[i]

A series of articles, poems, stories, and photographs, The 1619 Project intended “to reframe the country’s history by placing the consequences of slavery and the contributions of Black Americans at the very center of the United States’ national narrative.”[ii] An expanded version in book form, which became a bestseller, has 58 contributors. Hannah-Jones edited the book and wrote the opening and closing essays. Hannah-Jones was slammed primarily by politically conservative critics, as well as some historians, for what they viewed as flawed historical interpretation of the legacy of American slavery.[iii] Despite the criticism, her work was awarded the 2020 Pulitzer Prize for Commentary.

Like Hannah-Jones, McKissick in his solo-authored book detailed the unequal treatment and overlooked contributions of African Americans to the United States through the lens of the nation’s founding documents. The title of the book comes from Article 1, Section 2 of the Unites States Constitution:

Representatives and direct Taxes shall be apportioned among the several States which may be included within this Union, according to their respective Numbers, which shall be determined by adding to the whole Number of free Persons, including those bound to Service for a Term of Years, and excluding Indians not taxed, three fifths of all other Persons.[iv]

“‘All other persons’ meant Black People,” McKissick wrote. “If you were Black, you were only three-fifths of a man in the eyes of Alexander Hamilton, Benjamin Franklin, Roger Sherman, Charles Pickney, James Madison, John Blair, Robert Morris, and the other witnesses in Philadelphia.”[v]

Reading The 1619 Project and 3/5 of a Man in proximity is to see how each work of commentary dovetails with the other, framing a sordid history of the white treatment of Black people. Matthew Desmond, professor of sociology at Princeton and a contributing writer to the New York Times Magazine, wrote a chapter for the 1619 book titled “Capitalism.” Desmond details the compromise permitting Black persons to count as three-fifths of a citizen, providing slaveholding states with “outsized political power in both Congress and the presidency…So if Washington often feels broken, that’s because it was built that way.”[vi] Little doubt McKissick would have agreed.

Both books also recognize that the brief period of Reconstruction was followed by backlash against Black freedom. “Southern states swiftly reinvented their tools for racial control and enacted ‘Black Codes’ that were akin to the old slave codes,” according to coauthors Leslie Alexander and Michelle Alexander in an essay titled “Fear” in The 1619 Project. “As expressed by one Alabama planter: ‘We have the power to pass stringent police laws to govern the negroes – This is a blessing – For they must be controlled in some way or white people cannot live amongst them.’”[vii]

Similarly, McKissick notes in his book that with the rise of the Ku Klux Klan and widespread white supremacy, “The Black Codes, instead of the Constitution, had become the law of the land.”

The Black Codes had existed since 1619 – that fateful year when the first boatload of slaves arrived in America. It was also the year of the first meeting of the House of Burgess in Virginia – this country’s first meeting of the representative democracy. Slavery could not have been so effectively enforced without the support of laws like the Black Codes – laws that were written, implied, or adhered to by “gentlemen’s agreement” … These written and unwritten laws enforced a social order in which white men need not compete with Black Men on any level.[viii]

McKissick’s dedication at the front of the book reads, “This book is dedicated to all the young people I have known and worked with who are seeking to bring about change in their society and who can see very clearly that changes must be made.” Progressive Supreme Court Justice William O. Douglas (1898-1980) wrote in his foreword, “The mood of this book makes it a must for all Americans. The mood reveals the depth of the anguish and anger in the Black community. I hope White America understands the mood. If we do, then we will know that tear gas and armed might are no answers to our problems.”[ix]

McKissick was not a bestselling author like Hannah-Jones, but he was well known in the 1950s and 1960s as a civil rights activist. Born in 1922, he joined the NAACP at age 12. As lead plaintiff of a lawsuit led by Thurgood Marshall, McKissick became one of the first Black students admitted to law school at UNC-Chapel Hill in 1951.[x] In 1959, McKissick’s children became part of a case to desegregate public schools in Durham, NC.[xi]

In 1966, James Farmer stepped down as director of the Congress of Racial Equality (CORE), “leaving the more militant Floyd McKissick in his place.” Under McKissick, “CORE adopted a platform based on Black Power and limited white involvement in the organization.”[xii]

“[M]y dad became involved in CORE because of CORE’s involvement in the Sit-ins, the Freedom Rides and their more direct action approach in the fight for civil rights,” said McKissick’s son, attorney Floyd McKissick Jr.[xiii]

McKissick left CORE in 1968 to build the Black-operated utopia of Soul City, NC with federal funding from the Nixon administration that led to criticism from politicians of both parties, as well as the press.[xiv] The experiment ended in 1979 when the Department of Housing and Urban Development withdrew funding. A small number of Soul City residents remain in the community.

“Every time a white American sees a Black Man, he witnesses the guilt of his forefathers,” McKissick wrote. “He witnesses his own guilt, too, and is reminded of his own responsibility for the perpetuation of that guilt. White men know – although they rarely admit – that Black People would be justified in any means they adopted to end their oppression.”[xv]

Hannah-Jones wrote in the preface to The 1619 Project, “Eight in ten Black people would not be in the United States were it not for the institution of slavery in a society founded on ideals of freedom. Our nation obscures and diminishes this history because it shames us.”[xvi]

Both McKissick and Hannah-Jones tackle the legacy of racism in their respective works. Two eras, two authors, yet many of the same conclusions concerning economic discrimination, historical distortion, and continued oppression by white majorities.

About the author: Anthony Hatcher is Professor of Journalism and Chair of the Journalism Department at Elon University. His research areas are journalism history and the intersection of religion, culture, and media.

[iii] Katie Mettler, “Five Professors Say the 1619 Project Should Be Amended. ‘We Disagree,’ Says The New York Times,” The Washington Post, December 22, 2019, https://www.washingtonpost.com/history/2019/12/22/five-professors-say-project-should-be-amended-we-disagree-says-new-york-times/; “We Respond to the Historians Who Critiqued The 1619 Project,” The New York Times, December 20, 2019, https://www.nytimes.com/2019/12/20/magazine/we-respond-to-the-historians-who-critiqued-the-1619-project.html. In The 1619 Project book’s acknowledgements, Hannah-Jones notes, “All of the essays were reviewed in their entirety by scholars with subject-area expertise.”

[v] McKissick, 3/5 of a Man, 56. In his book, McKissick capitalizes “Black People” and “Black Men” unless quoting other sources. He uses “Black Men” generically to discuss discrimination against all Black citizens.

[xi] “And Justice for All,” Durham County Courthouse Exhibit, accessed July 18, 2022, http://andjusticeforall.dconc.gov/gallery_images/andree-mckissick-and-henry-vickers-integrate-carr-junior-high/. The children of Floyd and Evelyn McKissick were Floyd Jr., Joycelyn, Andree, and Charmaine.

[xiii] Floyd McKissick Jr., personal interview with author, March 24, 2022; email exchange with author, November 19, 2022. Sit-ins were protests conducted at businesses that refused to serve Black people. The most documented is the 1960 sit-in by Black students from NC A&T State University at the Woolworth lunch counter in Greensboro, NC.