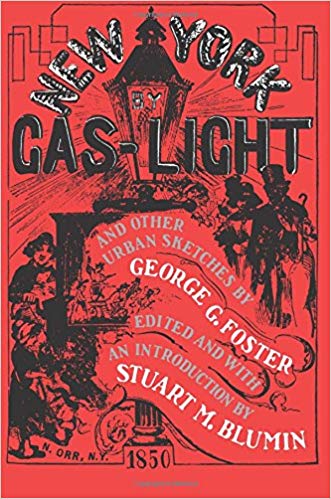 “Antebellum Urban Reporting as Literary Journalism and Muckraking: George G. Foster’s City Sketches in the New York Press” points to the historical developments and significance of alternative, or non-mainstream, forms of journalism. More specifically, George G. Foster’s antebellum writings can help identify the earlier-than-acknowledged beginnings of muckraking and literary journalism, and perhaps even investigative as well as immersive reporting and today’s watchdog journalism.

Foster’s style was bold and daring, and when placed in the context of the 1840s-50s social reality, he can be viewed as an early literary journalist, as by the middle of the nineteenth century the press had shifted its reportage toward a more immersive and lifelike reportorial style. Furthermore, mid-nineteenth century editors were interested not in serving a party but in providing realistic reportage about items of human interest, contemporary life, and society’s surroundings.

A study of Foster’s writings could contribute to valuable classroom discussions and activities in subject areas such as history, English, and journalism, along with qualitative research methods involving archival research and use of historical primary sources for added depth. More specifically, concepts presented in the article could be included in journalism and media-specific courses focusing on the history of literary journalism, muckraking, investigative reporting, and immersive journalism.

1) Studying the development of journalistic styles, or genres, in the context of culture, society, and politics through a comparative historiographical analysis.

Introduction: Journalistic stories come in many shapes and forms and are influenced by the technologies, environment, and context of their production. Foster’s style emerged because of the changing cultural and social circumstances of the mid-nineteenth century. The sensational, lively, and muckrake-like style of journalism that developed in the 1840s and ’50s—perhaps in response to the moral degradation and corruption in the growing metropolis—has rarely been addressed through the exploration of literary writings such as those of George G. Foster found in his “City Items” columns of the New-York Tribune and in his books New York in Slices (1849), New York by Gas-light (1850), Fifteen Minutes Around New York (1854), and New York Naked (1856).

Through the careful reading of Foster’s writings, students can identify the early beginnings of literary journalism and muckraking, understand how early writers of the specific genre have contributed to society and journalism at large, and begin to observe the changes that have occurred with the writing style over time.

Using Wm. David Sloan’s Historical Methods in Communication, students could perform a historiographical analysis. While learning about different schools of historical interpretation, the following activity will offer a hands-on experience working with primary sources and analyzing journalistic writing in the context of its production. Prior to the assignment, students should be familiar with each of the following schools outlined by Sloan:

For a single in-class exercise, the instructor might assign groups of students and ask them to 1) research the social and cultural context of the mid-nineteenth century, and 2) identify elements of Foster’s sketches that may be associated with the different interpretation schools.

For a semester-long project (completed as a group or as individual student research essays), students could compare Foster and another author or authors while studying the changes in the literary journalism or muckraking style within the cultural/social/political context of the time.

For this particular project students will have to 1) research the social and cultural context of the two different time periods under study; 2) choose one or more historical interpretation school(s) and apply the main ideas of the school(s) to both authors; 3) point to the differences and similarities in the authors’ writings; 4) reflect on their findings by addressing the following questions:

5) Ask students to come up with a new “school” of interpretation that might explain more recent forms of alternative, or non-mainstream, reporting styles that fit today’s media climate.

Some authors to consider for this comparative study:

Introduction: Although divided by almost half a century, from a journalistic standpoint, there are similarities not only between Foster and literary journalists but also between Forster and muckrakers as they shared a few common ideals: the exposure of social ills and corruption. The early twentieth-century progressives were fighting for principles, and they did not hesitate to hit hard and often, nor to dramatize the reality of poverty, prostitution, and prejudice. They not only published in leading magazines such as McClure’s, but their work––Ida Tarbell’s History of the Standard Oil Company, Upton Sinclair’s The Jungle, and Jacob Riis’s How the Other Half Lives––also was published in book form just like Foster’s.

In addition to exploring the changes/developments of an individual journalistic style, comparing the narrative techniques of literary journalists AND muckrakers side by side can help illuminate the journalistic value of both genres. For this activity, the instructor should provide information on the elements of each genre and a list of muckrakers AND literary journalists along with titles of their works. Students will select one representative from each genre, study the writings, and discuss the similarities/differences between the two genres.

Introduction: Foster’s unique approach to observing and recording the vices and virtues of New York City during the 1840s and 1850s is readily identifiable with the then-emerging genre of urban journalism. In Foster’s case, the genre itself can be defined as one serving to comment on the urban scene of the growing nineteenth-century metropolis and the tainted society and institutions that thrived in it, but how does it compare to content we see in today’s newspapers?

Through this assignment, students should be able to identify and use a variety of literary writing techniques based on personal observations and research in order to gather material for a long-form story. At the beginning of the semester the instructor should define the key elements of literary journalism. Students will be required to read Foster’s sketches in the New-York Tribune and study his writing style. Next, students will begin to produce a series of essays following Foster’s “template” or “walking map” of observation, covering different areas of a selected geographical part of their city, and critiquing existing issues. Following this “personal” essay approach, students can research the facts behind their critiques while incorporating historical data and interviews and weaving in existing cultural or political issues.

4) Exploring past and present press criticism

Introduction: Press criticism of the first half of the nineteenth century suggests that the function of the press was to serve the public by pandering to baser tastes and failing to take a stand against threats to society. There was a struggle to preserve a romantic view of the crusading journalist, which Foster openly attacked in many of his works. As noted by journalism historian Hazel Dicken-Garcia, a common criticism of Foster’s era revolved around the notion that the press was destroying the values in society. Foster’s accounts responded to that “accusation” as he exposed malpractices in the newspaper business, yet they revealed too much about the ills in society and highlighted some major weaknesses of the American nation and its institutions. Has this changed, how, and why?

For this activity, students will be required to read New York Naked –– a book by Foster that may be of a particular interest because publishers refused to include materials from it in their publications, likely because the volume predominantly focused on critiques of the press and those in charge of it.

The following semester-long paper assignment (be it individual or group) may help students understand the ways in which views of the press have changed over time as well as understand the arguments for and against the specific style/genre of writing. Students should be asked to 1) list the key comments and critiques Foster noted about the mid-1800s press and publishers in New York Naked; 2) research contemporary articles (on social media, blogs, and/or mainstream publications) commenting on and critiquing today’s press; and 3) compare findings from both periods, taking into consideration changes in the business, structure, and technologies of journalism for each time period.

Questions to reflect on in the final paper:

Reynolds, David S. Beneath the American Renaissance: The Subversive Imagination in the Age of Emerson and Melville. Cambridge, MA: Harvard University Press, 1989.