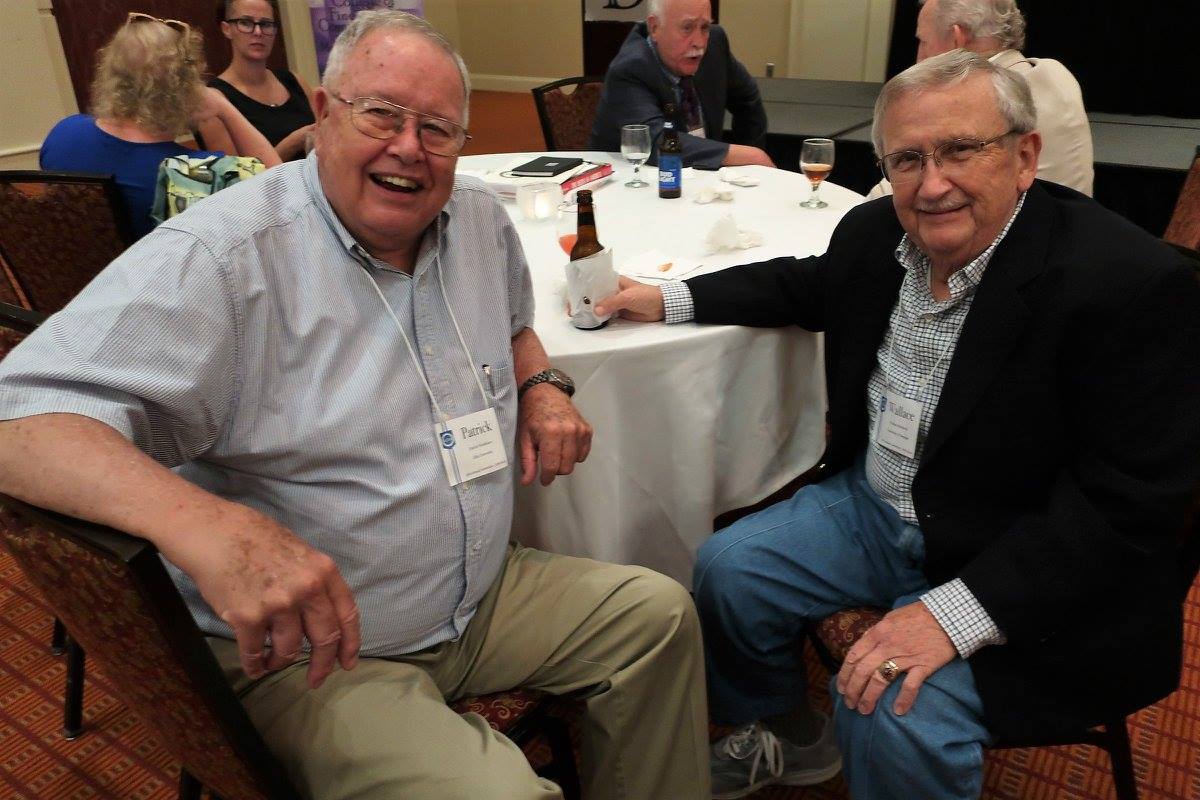 The featured photo above depicts Patrick Washburn, left, and Wally Eberhard at a 2017 journalism history conference.

Wallace B. “Wally” Eberhard was a giant in the field of journalism history whose influence spanned across multiple journals and academic organizations. Following his passing on Oct. 7, 2018, a tribute exploring his contributions to Journalism History and its home organization, AEJMC History Division, seemed fitting.

Eberhard published an article in the journal during its inaugural volume in 1974. Written when Eberhard was an assistant professor at the Henry W. Grady School of Journalism at the University of Georgia, “Sarah Porter Hillhouse: Setting the Record Straight” told the story of Georgia’s first woman editor and printer.

Although other historians dismissed Hillhouse’s Washington Monitor as dull and inconsequential, Eberhard argued that it presented “a varied news diet emphasizing public issues, with an occasional touch of levity or even sensationalism for added spice.” Eberhard skillfully connected past and present, explaining that in the early 19th century, Hillhouse showed “the kind of commitment to providing background on public affairs that marks the better newspapers today.”(1)

A friend to books

Eberhard reviewed books on an array of other topics as well, including coverage of women’s executions, fictions and frauds, and college news. Each review demonstrated Eberhard’s characteristic fairness and ability to convey constructive criticism gently, his narrative writing style, and above all, his passion for history.

In a 2006 review of David Finkelstein and Alistair McCleery’s An Introduction to Book History, Eberhard lamented that few research papers at AEJMC or AJHA explored the history of the book. However, he asserted, the book was a best friend.

The review opened with a description of Eberhard’s office, where serious volumes and “Robert Parker potboilers compete for space and attention.” Eberhard wrote that the friendship with books, “like the human variety, leads to occasional conflict, usually when shelf and floor space overflow.”(2)

The Introduction to Book History review also noted a communication revolution expanding print into digital media that threatened the book as we know it, but Eberhard rejoiced that the book had persisted through the introduction of several new media technologies over the years.

Evolving technology concerned Eberhard as a scholar and an educator for decades. In another AEJMC-affiliated journal, Journalism Educator, Eberhard wrote in 1974 about technology and print media. He argued that AEJMC divisions (including History) should record data and assess change for the sake of historians 100 years in the future. He wrote:

Mass communication—the print media in particular—is in the midst of a technological revolution of high magnitude, and yet there is a danger we will pass through it without a full understanding of its implications or even an attempt at data gathering to make future understanding possible.(3)

Washburn asserted that Eberhard also influenced fellow scholars face-to-face by encouraging them in their research endeavors. Whenever Washburn gave a conference paper, he said, Eberhard would tell him how much he enjoyed the paper and then ask questions about it that helped Washburn make his work better.

“He always did it with a smile, which made him a delight to talk to,” Washburn said. “And I know he did that with others, too, because they have told me about it.”

Most of all, Washburn said he was impressed that Eberhard continued doing historical research long after he retired.

“He was an excellent example for all of us who are retired,” Washburn said. “In other words, keep making contributions to our field as long as you can.”